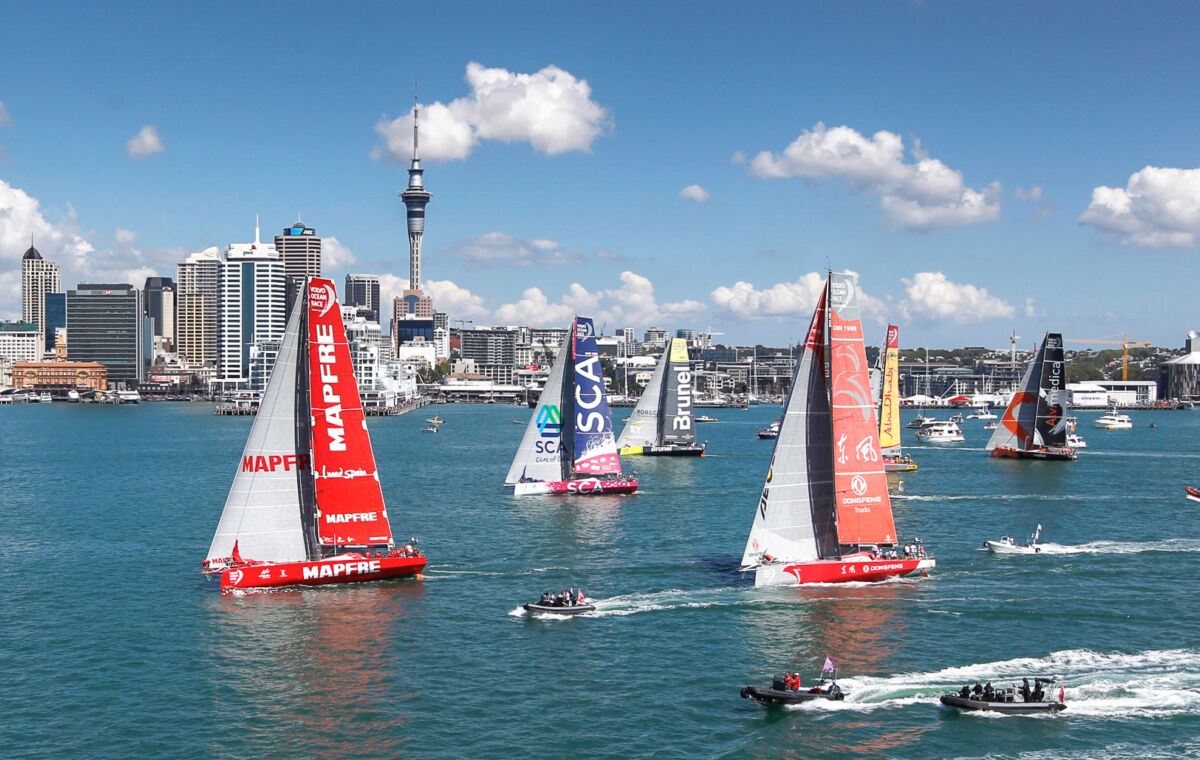 Nine Kiwi sailors on seven boats are racing for home and Auckland’s party zone, in the 6th leg of the Volvo Ocean Race.

Ahead of their arrival Auckland Viaduct is being transformed into a vibrant Race Village, with Viaduct Events Centre acting as Race HQ.

Right now, the six yachts – carrying nine Kiwi sailors, including America’s Cup heroes Blair Tuke and Peter Burling – are duelling down through the Pacific, from Hong Kong in a race for home town honours and the bragging rights of leading the fleet into Auckland for the 23 day stopover.

Burling and Tuke, who took New Zealand to America’s Cup victory in Bermuda in 2017, are pitted against one another on separate boats and due to arrive in Auckland around 27th February.

Peter Burling who is sailing with Team Brunel has watched previous Volvo Ocean Race fleets come into Auckland says the arrival into Auckland will be one of the highlights of the epic nine-month race.

“It’s going be pretty cool to be part of Team Brunel this time. I’m looking forward to seeing all the people on the docks when we sail in to Auckland and I hope they will cheer for us,” says Burling.

Tuke who is sailing with Mapfre says the Auckland leg is one he has been looking forward to.

“I have not been home since late September. To sail into New Zealand will be pretty special for myself and all the Kiwis on the different boats.”

Won by Sir Peter Blake in 1990, Grant Dalton in 1994, and Mike Sanderson in 2006, the Volvo Ocean Race (formerly known as the Whitbread Around the World Race) is inextricably linked to New Zealand sailing, with Kiwi sailors on every one of the six internationally sponsored boats.

In this edition, Burling and Tuke face off against the first Kiwi woman competitor in almost two decades, Bianca Cook, sailing on Turn the Tide on Plastic.

Veterans of the Volvo Ocean Race, Stu Bannatyne, and Daryl Wislang, as well as Louis Sinclair, Brad Farrand, and Tony Mutter, are on Dongfeng, Mapfre, AkzoNobel, and Vestas boats.

“It is exciting to sail into Auckland as it’s one of the places I consider to be home. Sailing into the city of sails onboard a Volvo Ocean 65 is most people’s dream and to be lucky enough to be able to do it is a fantastic feeling,” says Blake.

“My Dad played a huge part in this race, it was a big part of my life growing up so I know just that thought will make the sail up into the harbor even more exciting.”

Once in Auckland, the boats compete in two races: an In-Port Race on the 10th March, and a Pro-Am Race Series on the 16th March.

In the meantime, the Kiwi sailors will join yachting fans to enjoy the race village’s free entertainment, including a chance to quiz them at the Legend’s Series of talks featuring Burling, Tuke and Cook.

Auckland's waterfront will be transformed into the Volvo Ocean Race village.

An expected 500,000 yachting fans will be pouring through the village to get a closer look at the boats, enjoy the live entertainment, see displays of the boats and how they work, and a get a chance to watch the teams strip back the Volvo 65 boats as they get them ready for the next leg of the race that takes them through the treacherous Southern Ocean and around Cape Horn.

“The Volvo Ocean Race has a strong connection to New Zealand that spans over forty years,” says Grant Calder Managing Director of the Auckland Stopover,

“We cannot wait to welcome the fleet into Auckland and give Kiwi’s the opportunity to again be a part of this event.”

Te Wero Island will be the entertainment hub with a packed programme of events on the big stage, large screens, live music plus concept bars. Karanga Plaze will offer a range of quality stalls, public eateries and family activities.

The New Zealand sailors who survive on little more than freeze dried food on board the boats will be looking forward to some kiwi favourites when they arrive in port on the 27th February.

“If there is one thing I will eat when I get home it will be a steak and cheese pie, and an L&P,” says Blair Tuke.