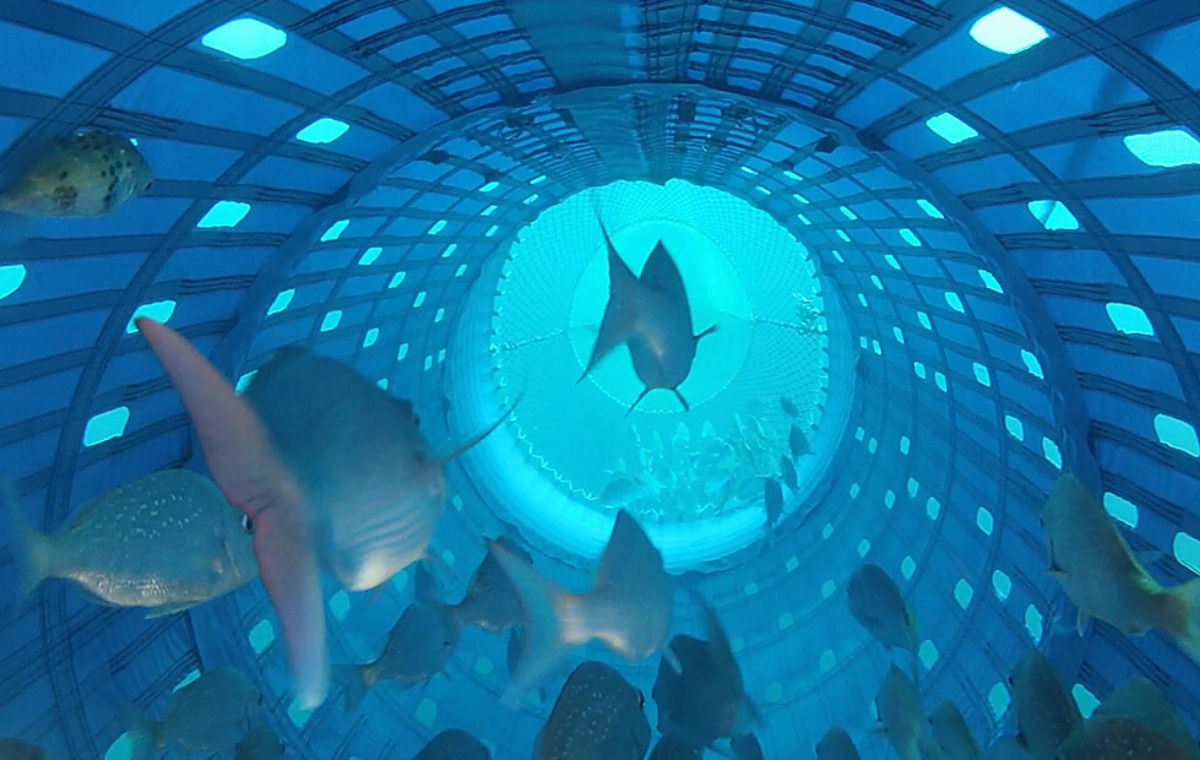 Auckland New Zealand, 7 April 2015 – The first set of results are in from two years of testing on New Zealand’s new Precision Seafood Harvesting method and scientists say already they can see that the survival rates for fish are better than expected.

The new way to fish is a potential replacement for traditional fishing methods. It is a large, flexible PVC liner with specifically sized holes along its length that allow undersized fish to escape before they are even brought on board a fishing vessel.

And the fish which are brought on board stay in great condition because they are still swimming in the liner when they are on the deck. That means they are less stressed and much less likely to be injured.

Alistair Jerrett, the Science Group Leader from Plant and Food Research says so far the results are excellent.

“We were certainly hopeful that we’d improve the survivability rates for the fish we were catching, but already it’s better than we expected. Typically, snapper harvested with the PSH system have a 100% chance of survival if they’re fished from a depth of 0-20 meters. For snapper taken from deeper water, from 20-90 meters, the survivability number is 79% and we’re going to get better and better.”

Dave Woods, the Programme Manager for PSH says a fully functioning and commercialised PSH has huge potential to increase the sustainability of New Zealand’s fisheries.

As well as taking better care of the fish, this new way to fish also opens up new potential markets and opportunities for better quality fish being delivered to consumers.

“It changes the way fish can be brought to market. We can offer more great quality fish to consumers and there are new opportunities for higher end product. It all increases the value of the products we can offer and in turn, the value of the industry. The story of how the fish is caught is increasingly important for consumers and this new method is a great New Zealand story, that will potentially change the way the world fishes.”

Precision Seafood Harvesting is the commercialisation phase of nearly ten years of New Zealand research. Three major New Zealand fishing companies are involved. Aotearoa Fisheries, Sanford and Sealord are investing $26 million between them into the programme. The other half of the funding comes from the Ministry for Primary Industries, which is matching the industry investment under a Primary Growth Partnership. Scientists at Plant & Food Research are working with the fishing companies to develop and trial the technology on commercial fishing vessels.

Suzy Black, a senior scientist on the project says it’s been a pleasure to work with the commercial fishers on developing this new way to fish.

“I didn’t think that in my career I would have the privilege of being a part of such an awesome programme. We’re getting huge support from our industry which we might not have expected ten years ago, but they are fantastic to work with and ultimately we are making fishing better and potentially turning it on its head.”

And Precision Seafood Harvesting has already won multiple awards for innovation including the Supreme Award and the Innovation in Sustainability & Clean-Tech Award at the 2014 NEW ZEALAND INNOVATOR AWARDS and two major categories at the KiwiNet Research Commercialisation Awards last year.

However scientists are cautioning against too much excitement too early with the new technology.

Dave Woods, from PSH says there is still plenty of work to do.

“We are absolutely thrilled with the results so far and there’s no doubt the results on survivability are better than many of us were hoping for but we are only part way through the process. We need to test PSH on more species and in a greater variety of conditions. We are only in the third year of a six year programme, so there is plenty of science still to be done.”

Alistair Jerrett says they also need to deal with the issue of fish being a little too relaxed when they’re in the PSH tube. “We were hoping many more undersized fish would take advantage of the built in escape zones while the PSH was underwater, but it seems that snapper in particular are a little too happy to hang out in the tube. So we are devising ways to encourage more of them to head for the escape zones and out into the open water.”

Testing now continues on new configurations of the fishing technology and scientists say they’re aware that the eyes of New Zealand and the world are on the progress of this technology.

Dorje Strang of Sealord Group Ltd says one area of focus will be deep water.

“We want to look at how the system operates in the deep waters off the South Island and particularly on vessels that are fishing for hoki. Continuing to test for different species and at different depths is crucial to developing the most robust technology possible that can potentially work across the entire fishing fleet.”

Steve Tarrant, General Manager at Aotearoa Fisheries Limited says this is a system all kiwis can be proud of.

“This is a great example of New Zealand innovation at its best. We are very proud of what we’ve done so far and we hope as things progress more New Zealanders will get a sense of why we’re so excited about what we have here. This is a revolution in fishing and we are leading the way.”