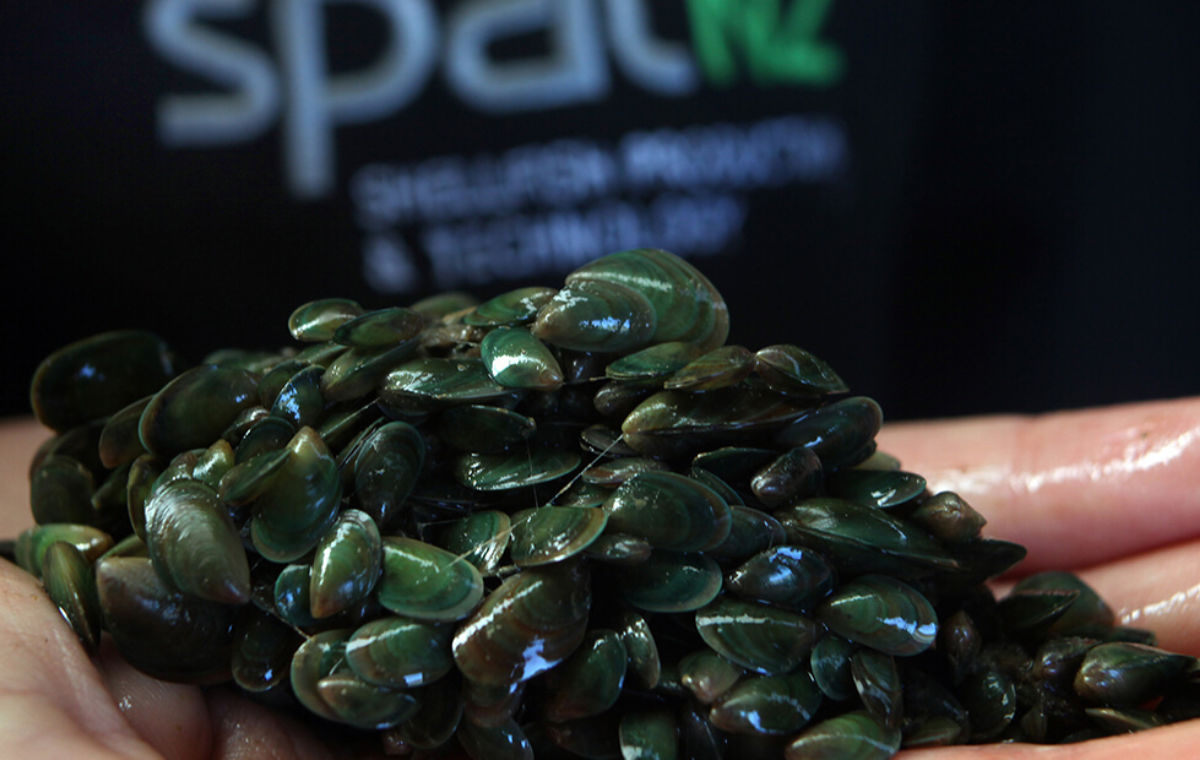 New Zealand aquaculture will be getting stronger mussels, thanks to some heavyweight Kiwi science underway in Nelson.

A new hatchery and lab facility is about to open just north of the city at the Cawthron Aquaculture Park where Greenshell™ Mussels can be selectively bred like sheep or cattle to give our mussel farmers the very best that nature has to offer on their mussel farms.

The project leaders say it takes the element of chance out of mussel farming.

Gary Hooper, CEO of Aquaculture New Zealand, says until now mussel farmers have been very much dependent on mother nature.

“All of our mussel spat is caught wild. For example, we have to wait for it to wash up onto 90 Mile Beach attached to seaweed. We just have no control over it.

“If farmers can get their spat from a hatchery, that changes a lot. They will know what they’re getting and when they’ll get it, and it will produce high performing mussels.”

Rodney Roberts, the Programme Manager at SPATnz, says mussel parents need all the help they can get.

“In nature, one female mussel might spawn thirty or forty million eggs. The vast majority of those won’t survive. Those sorts of rates make things tough for mussels and tough for us trying to produce baby mussels in a hatchery. Survival rates like that would make our hatchery completely uneconomic, so we’ve had to develop methods that let us do much better.”

SPATnz, which stands for Shellfish Production and Technology New Zealand Limited, is a Primary Growth Partnership (PGP) programme – a collaboration between industry and the Ministry for Primary Industries (MPI). SPATnz’s aim is to produce innovations to advance New Zealand’s mussel aquaculture industry and deliver benefits for New Zealand’s economy. The new hatchery is part of this seven year SPATnz PGP programme, with equal funding of $13m each from MPI and commercial partner Sanford.

Ted Culley, General Manager of Processing at Sanford, says he’s thrilled with the new hatchery and the work being done there.

“When you walk in there you see state of the art knowledge being used in a state of the art facility to produce Greenshell™ mussel spat. It hasn’t been done like this anywhere else in the world. We are at the cutting edge of technology here and eventually this programme will benefit the whole of the mussel business and potentially beyond.”

Ben Dalton, Deputy Director General at the Ministry for Primary Industries, says there are substantial benefits for the wider economy.

“This is a great investment. The initial financial benefits are expected to be around $80 million a year by 2026 or up to almost $200 million per year if the technology is adopted throughout the industry in New Zealand.”

“Great work like this is a direct result of science and industry working together. It means mussels have the potential to become an increasingly higher-value product.”

SPATnz scientists say it was important to them that the technology used to breed the mussels was natural and sustainable.

Our breeding programme relies on conventional selective breeding – just like terrestrial farmers have used for generations. There is no genetic engineering involved but modern techniques like DNA fingerprinting are really useful to make sure that our breeding population remains genetically diverse. It’s not about breeding one line of “super mussel” – it’s about maintaining a wide range of high performing lines to choose from.

We feed them all natural algae like they would eat in the sea and we keep them in clean seawater. As a result, we can naturally breed healthy baby mussels to underpin a wonderfully sustainable and nutritious food.

“Greenshell™ mussels have among the best sustainability credentials of any seafood, so it is great to be supporting the next phase of development for an iconic Kiwi product.”

Scientists at SPATnz use a wash of cold water to encourage their mussel parents to spawn. It’s a deceptively simple process but getting things exactly right has taken a lot of time and some painstaking research.

They are only two years into the seven-year PGP programme, but in just a matter of weeks the very first batch of mussel spat from the new hatchery will be going out to farms.