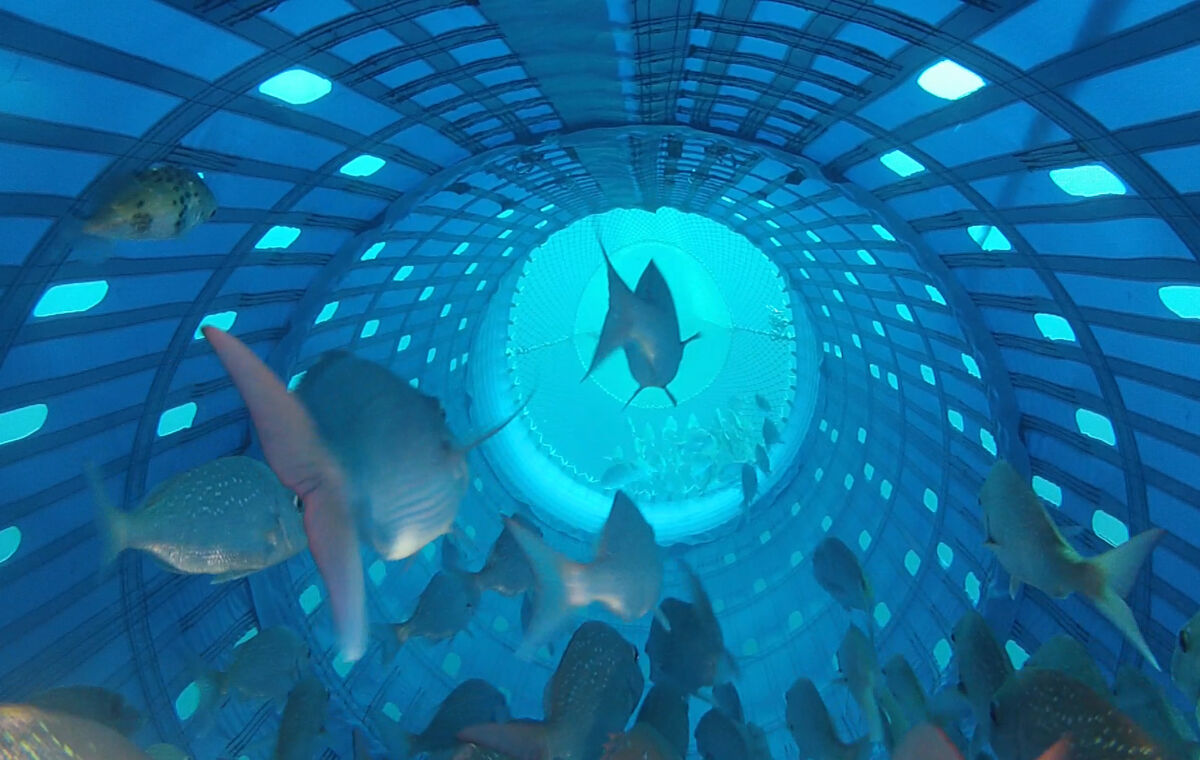 The future of fishing: Snapper in the new Precision Seafood Harvesting technology, that’s now approved for commercial use on both inshore and deep water species.

But those working on the programme say while they have come a long way in developing the new way to fish, they have only ‘hit the tip of the iceberg’ in terms of what this could do for putting high-value sustainable fish on the table for consumers while looking after fish stocks and protecting marine mammals.

After seven years of trials by the programme, Fisheries New Zealand has approved the use of the new kiwi developed technology, known as the Modular Harvest System (MHS), in North Island inshore fisheries for snapper, tarakihi, trevally, red gurnard, and john dory with specific conditions.

Precision Seafood Harvesting is a $48 million, 7-year programme between the Ministry for Primary Industries (MPI) and three fishing companies; Moana New Zealand, Sealord Group and Sanford Limited, to develop a new fishing technology based on science from Plant & Food Research.

There are currently 10 Sanford and Moana inshore vessels trialling the technology under a special permit. With the approval of the MHS for commercial use, vessels and their crews will transition to using it full-time and additional vessels will take up the technology.

Greg Johansson from the PSH Governance Group has worked on the project since the start and says the fishing crews testing this new technology over the past seven years are heroes of this kiwi innovation story. “They are part of creating a transformational legacy for the next generations of kiwi fishers. They don’t want to go back to traditional fishing gear – they are excited about this as their future for fishing, and now want to get into it full time to see how they can make it even better.”

The technology is the first innovation of its kind in 100 years of commercial fishing that has been approved for commercial use in New Zealand, and it’s a world first. Greg Johansson says the new way to fish means better quality fish, less waste and will have long term benefits for sustainability of New Zealand fish species.

Fisheries scientists and fishing crews working on developing the technology have found that fish caught using the MHS are in much better condition and quality when they are landed on board because, unlike traditional mesh-based trawl designs, once inside the MHS underwater the fish are held in conditions of very low velocity water flow.

The fish are brought on board still swimming inside the technology’s unique liner. This means they are alive, in great condition and by-catch or undersized fish can be returned to the sea with a much better chance of survival.

“Importantly fish that go through the specially designed ‘escapement holes’ in the MHS underwater have a better chance of survival than if they go out through traditional trawl mesh,” says Johansson.

The aim of the programme when it began back in 2012 was to deliver longline quality inshore fish, like snapper, at a lower cost, resulting in higher value for the same volume of fish harvested.

“But we’re still only just starting to really see the potential for longer-term biomass gains from either selectivity within the MHS or release post-harvest. Like all new innovations, the development and testing takes longer than anticipated and we’ve still got a lot of work to do,” he says.

The Precision Seafood Harvesting (PSH) technology was the first non-mesh commercial fishing method to be approved for use in New Zealand following changes to the fishing regulations in 2017. The technology got the green light for commercial use in the deep water hoki, hake and ling fisheries in May last year. Fishing companies Sanford and Sealord now have a total of eight deep water vessels using the technology.

“What we’ve seen in the deep water fisheries is that once the technology is in commercial use, fishing crews continue to build on the work of the scientists to improve the technology and what it can do. We expect this will happen on the inshore vessels too,” says Greg Johansson.

Nathan Reid is the Quota and Resource Manager at fishing company Moana New Zealand. Reid was part of the initial work exploring alternatives to current trawl methods with fisheries scientists and fishing experts before the PSH programme was formally established. He says that the PSH programme has not only developed the new way to fish, it’s also seen the team discovering and developing new innovations, like the ability for fishing crews to monitor what’s in their catch in real time while they are fishing.

“For the past 100 years, we’ve had limited visibility of what is occurring inside the trawl net. Now we’re developing underwater monitoring and ‘remote release’ technology so fishing crews can monitor what they have got in the MHS in real time and safely release all the fish inside if a marine mammal, like a dolphin, swims inside.

Video: The crew of the Tengawai have been trialling the new way to fish for five years catching inshore species like snapper.

“These additional innovations are in their early stages of development, but if we can nail them, it will add to the overall sustainability benefits of this new way to fish by reducing the unintended capture of protected species and bycatch, and reducing tow times because we know when we’ve caught enough fish. This will also reduce CO2 emissions and benthic impacts,” says Nathan Reid.

“It’s a great example of how innovation breeds innovation. We’re not just designing a new way to fish, we’re also designing new ways to handle fish on-board to maintain their condition right through to the fish counter. We’re supporting new jobs and industry in how vessel design is reimagined, and we’ve created a new industry designing and making the MHS.

“We’ve also developed the ‘Tiaki’ brand which will be associated with the commercialisation of this method, which represents the care and guardianship that’s behind this new way of fishing,” says Johansson.

The seven-year programme funding period, to get the technology tested and commercialised ends in September. Nathan Reid says the Precision Seafood Harvesting entity will continue after that date with the fishing companies involved continuing to develop the technology and roll it out for commercial use on more vessels around New Zealand.

Reid says that there are still challenges in expanding the use of the technology and some fisheries due to terrain, depth and species, which means that its use might not be possible. “But into the future, the PSH team believes this technology will replace traditional trawl gear for many fisheries,” he says.