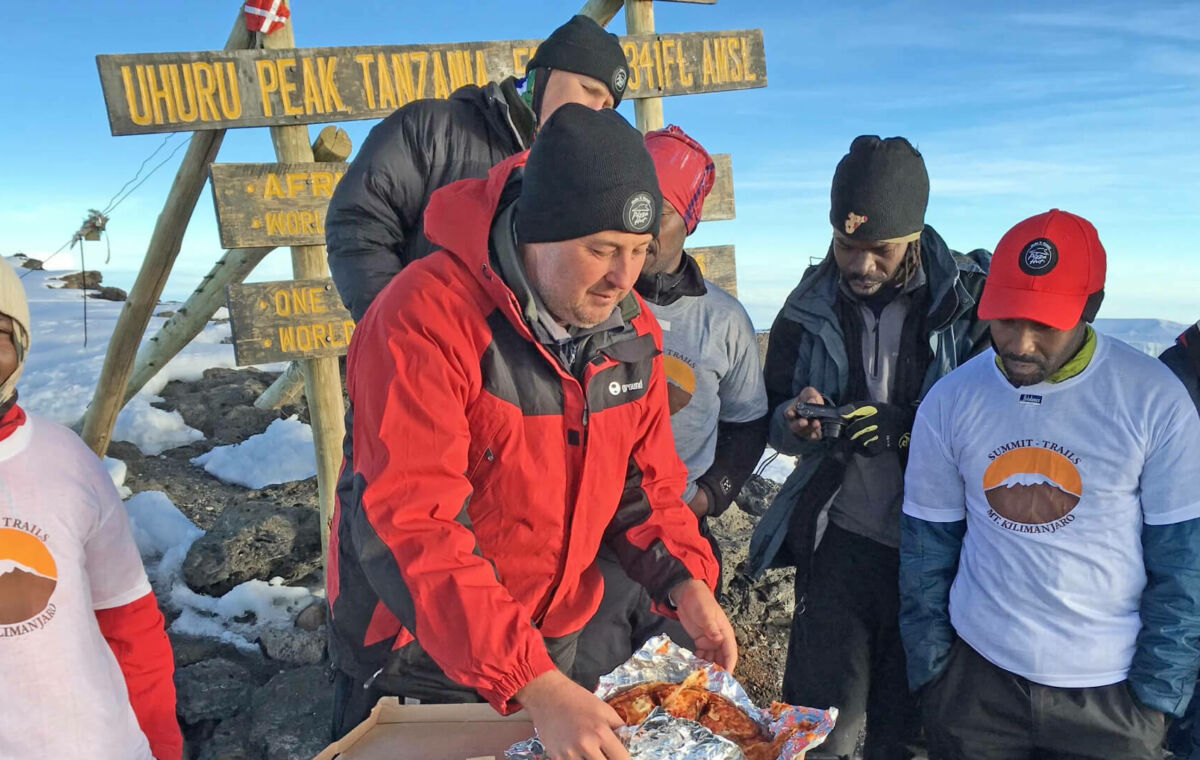 In recognition of entering its 100th country, Pizza Hut, a division of Yum! Brands, Inc. (NYSE: YUM) and the world’s largest pizza restaurant company, marked the milestone with a special pizza delivery to the summit of Mt. Kilimanjaro in Tanzania. The delivery set the Guinness World Records® title for the highest altitude pizza delivery on land at a height of 19,341 feet.

Pizza Hut markets around the world also joined the celebration of the 100th country milestone by making special deliveries to historical landmarks in other countries where Pizza Hut operates.

Here in New Zealand, Pizza Hut team members surprised customers with a delivery to the summit of Mt Eden.

Pizza Hut, which has more than 16,000 restaurants worldwide and 2015 sales totalling over $12 billion, is the first and only pizza restaurant company to have locations in 100 countries.

General Manager of Pizza Hut Africa, Randall Blackford, a team of Pizza Hut employees and several professional guides, hiked for six days to the top of Mt. Kilimanjaro to set the world record delivery. Blackford and the team shared a large pepperoni pizza at the top of the mountain in celebration of the Company’s continued global expansion. An adjudicator from Guinness World Records was on-site in Tanzania to verify that Pizza Hut in fact set the record for the highest altitude pizza delivery on land.

Not only did the team set a Guinness World Records title, they also raised money for the Msasani Primary School in Da Es Salaam, Tanzania as a way to show their commitment to supporting the communities where they operate. The money will provide desperately needed upgrades to the school for the 1,300 students and provide training for their teachers.

“We are extremely proud to be the first pizza restaurant company to be serving in 100 countries,” said Milind Pant, President, Pizza Hut International. “There has never been a more exciting time to be working at Pizza Hut. We are the most-loved and fastest-growing pizza restaurant company in the world and look forward to continuing to share our high-quality, affordable pizzas made by our passionate team members with consumers everywhere.

“We are thrilled to bring Pizza Hut to Tanzania and believe there is no better way to celebrate our 100th country milestone than by setting a Guinness World Records title for the highest pizza delivery on land to Mt. Kilimanjaro.” The first Pizza Hut restaurant outside the United States was located in Canada. The next international market was Costa Rica. The busiest Pizza Hut restaurant in the world is located inside the Sao Paulo Airport in Brazil. The Pizza Hut menu has been translated into more than 35 languages.

The five biggest markets for Pizza Hut outside the U.S. are China, UK, India, Malaysia and Indonesia. The most popular Pizza Hut pizza in the world is pepperoni. Pizza Hut employees more than 300,000 team members worldwide.